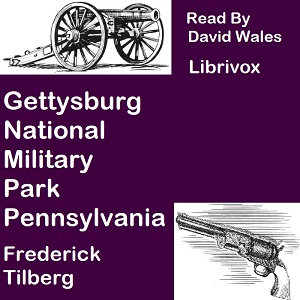 LibriVox recording of Gettysburg National Military Park, Pennsylvania by Frederick Herman Tilberg.
Read in English by David Wales
On the gently rolling farm lands surrounding the little town of Gettysburg, Pa., was fought one of the great decisive battles of American history. For 3 days, from July 1 to 3, 1863, a gigantic struggle between 75,000 Confederates and 88,000 Union troops raged about the town and left 51,000 casualties in its wake. Heroic deeds were numerous on both sides, climaxed by the famed Confederate assault on July 3 which has become known throughout the world as Pickett’s Charge. The Union victory gained on these fields ended the last Confederate invasion of the North and marked the beginning of a gradual decline in Southern military power. Here also, a few months after the battle, Abraham Lincoln delivered his classic Gettysburg Address at the dedication of the national cemetery set apart as a burial ground for the soldiers who died in the conflict. This 1954 publication (revised in 1961) is number 9 in the Historical Handbook series put out by the U.S. National Park Service. The author was a World War I veteran, a noted Civil War historian, and chief historian for the Gettysburg National Military Park in the 1950s and 1960s. - Summary by Frederick Tilberg and David Wales
For further information, including links to online text, reader information, RSS feeds, CD cover or other formats (if available), please go to the LibriVox catalog page for this recording.

Uploaded by librivoxbooks on October 24, 2021